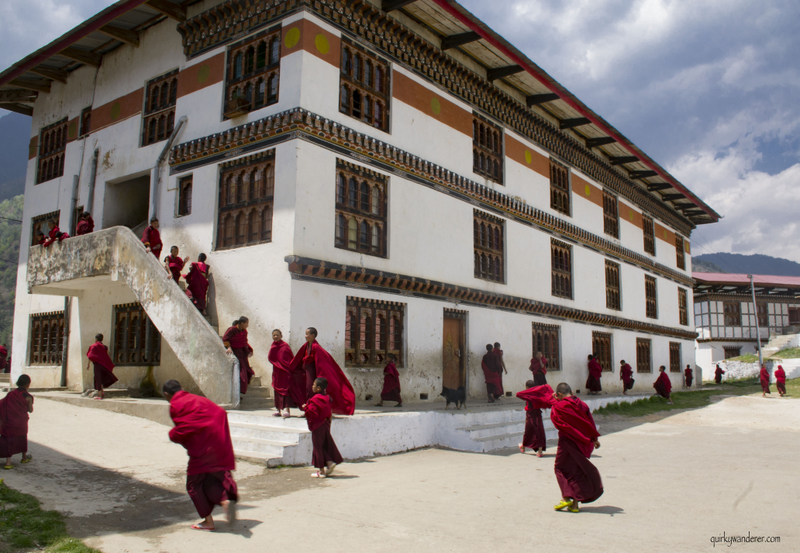 The train screeches to a halt as sounds of “Jhaaal muri” reach my ears. I struggle to get down from my side upper as the train stops at Siliguri.

After fifteen minutes , as the train snails past the Jaldapara forests, the view outside is nothing short of spectacular. Lush green forests with huge moss clad tree trunks, wildflowers growing over bridges built over dry, pebbled river beds and sunlight peering through the dense tree canopies.

The landscape now turns into tea estates. It is a delight seeing the rural countryside whizz by.

I think aloud, if the Duars are so beautiful, how would the Land of the Thunder Dragon be?

Mystical images cloud my imagination as I alight from the Kanchankanya Express at Hasimara.

Happiness is just 30 minutes away.

Fifteen years ago, in geography class, while filling out countries on the world map, identifying and coloring Bhutan wasn’t a big task.  A tiny speck of land sandwiched between Indian states.

Ten years ago, in junior college, when the Economics teacher explained GNP, eyebrows were raised when she mentioned that Bhutan measures Gross National Happiness.

How can a country be called a ‘happy’ country? Is it the absence of sorrow?

Is it contentment? Is it detachment from modernization and isolation from the world?

Intrigued, I seek to find answers to a dozen questions in my mind. The sweltering town of Jaigaon is divided from the gateway to Bhutan (Phuetsholing) with a gigantic white gate.

Enter the white gate and find a stark change from what you left behind.

There isn’t any honking of cars and streets are less chaotic.

I enter the jam packed, barely ventilated permit office. At once I was at task: scrutinizing the locals carefully trying to study if they are happy or not!  Girls in swanky Kiras (their national dress) sashayed in and out helping the tourists with permits.

Men with their lips stained with Doma (betel nut) directed the long queues of workers appealing for work permits, flashing their beaming grins.

The evening is spent visiting the Zangto Pelri Lhakhang, a stone’s throw away front the Permit office. People circumambulate this small Buddhist temple with intricately carved ceilings, praying with rosaries.

Frivolous laughter emerges from the nearby playground, as I make my way to the Kizom cafe.

A cozy cafe on the Main Street, serving not just good coffee but a variety of savories with FREE wifi!

Phuetsholing doesn’t have the distinct flavor of Bhutan. (Not because I doubt whether the Bhutanese Pizza at Kizom really had Bhutanese chillies or not.) Maybe I feel so because it lies in the Terrai region and Bhutan is characterized by its magnificent mountains.

More of a trading town, with an array of local bars, Phuetsholing is but just a gateway to the Druk -Yul (Land of the Thunder Dragon)

Read : How to reach Bhutan from India

The pursuit of Happiness has just begun.

Join me in this quest as I explore how happiness is scattered across this Forbidden Himalayan Kingdom.

Happiness in the architecture of Dzongs:

Dzongs are Bhutanese fortresses, usually built on a high altitude overlooking a city, offering panoramic views. These tall citadels, whitewashed in stone have spacious courtyards, Lhakhangs (Buddhist temples) and most of them have administrative offices within them.

A majestic white fortress stands majestically behind a row of purple Jacaranda trees.

Purple flowers strewn across the gardens, a bubbling river flowing alongside and a stoic fortress holding guard. The scene looks ripped from a magic fable as I cross the wooden suspension bridge to reach Punthang Dechen Phodrong Dzong.

Truly one of the most magnificent Dzongs in Bhutan, this ‘Palace of Great Bliss’ is situated at the confluence of two rivers, Mo Chhu and Pho Chhu. (Mother river and Father river)

At the entrance lies a steep wooden staircase, with huge honeycombs clinging on the ceiling. I imagine how impregnable the fortress would have been, when this staircase would have been withdrawn.

History comes alive as I walk into the first courtyard flanked with intricately painted balconies and ornate doors leading to administrative offices.

Instantly, this becomes my favorite Dzong. Why? Each window, each staircase, each balcony, each ceiling is carved to perfection. The melange of blue, orange, red, green splashed on wood is a treat to any architecture lover’s eyes.

I stand in the second courtyard, watching a group of monks chatter away in their break. This courtyard has prayer halls and temples, including the Dechen Lhakhang. While most of the Dzongs have two courtyards, this dzong has three, including a monk assembly hall with 54 intricate pillars.

While I have been tempted to click doors and windows in every Dzong I have been to, here I cannot get over the detailing. From the panels on the facades to the staircases to the colorful ceilings to the paintings on the walls.

It is in this Dzong that Bhutan’s most sacred relic, the Rangjung Kharsapani ( a self created image of the Bodhisattva of Compassion, Avalokiteswara) is preserved.

Right opposite to the main Dzong is a Lhakhang which hosts the Talking Buddha statue. With great views of the Dzong, the river and the gardens, the place exudes wonderful vibes.

A young monk grins sheepishly and points to a sign saying this is a wishing fulfilling Lhakhang.

I smile as I see a carpet of purple bloom all over. The breeze gently caressing the flowers as they continue to fall. The sky is peaceful.

Soaking in the energies of this place I wonder what can one possibly wish for after seeing a gorgeous sight like this.

Happiness is a color and I think its purple.

Five minutes more in this wind and I am sure to freeze. It is 5 p.m and hoards of tourists have gathered outside Thimphu’s administrative Dzong, the Tashi Choe Dzong ( literally translated as the fortress of the Glorious religion).

Entry is allowed only when the government officials leave and tourists are allowed only in the monastic part of the Dzong.

This is also the summer residence of the Je Khenpho (Chief of the Central Monastic body of Bhutan).

The road leading to the Dzong is thronged with idyllic flowerbeds full of gigantic roses.

After a customary security check, I sprint upstairs. A painted archway leads to the main courtyard enclosed with rooms and rectangular pathways.

Chants of reciting monks fill the air as the grandeur of Tashi Choe Dzong’s architecture makes you go back in history.

Dzongs are an architectural feat. Most of them have been built traditionally with not a single nail used and with no architectural plans. And Tashi Cho Dzong is no exception.

Surviving several fires and a massive earthquake, it has been rebuilt over the years and yet maintains an imperial charm.

Tourists saunter in the courtyard clicking pictures, some turning the rows of prayer wheels, while monks walk past the tourists, unperturbed by all the activity.

The orange pillars hold yellow and brown facades while they flaunt away their beauty. Wooden staircases run parallel white bricked walls as if showing the camaraderie they share.

Happiness is inanimate architecture coming alive. And no, I wasn’t dreaming.

“Jhomolhari!” They scream in ecstasy! Its a clear, bright day and we are at the outskirts of Paro. Nearly 14 kms from the main city, lies a Dzong in ruins.

Weeds grow all over the courtyard, which was once used by the Bhutanese to fool Tibetian invaders and trap them.

Druk-gyel ( literally translated as Bhutan victory) was built by Zhabdrung Nawang Namgyal ( The first unifier of Bhutan) to hold guard against Tibetian invasion.

Even though the Dzong is in ruins, it has a rustic charm.

Vertical prayer flags (called Darchors) flutter in the wind as you walk up the trail.

Yellow flowers and green meadows compliment the forgotten watch towers, as I see renovation work on in full swing.

And no “Jhomolhari” is no war cry. I knew what the fuss is all about when I climbed up the rocky steps to reach a broken edge. One of the tallest peaks in the region, Mt. Jhomolhari glistened in the sun, resembling an inverted ice cream cone, ready to melt away.

This glorious sight was the icing to the cake (literally!) and the cake was the view of Paro below. Paddy fields stitched together like the green patchwork quilt grandma made.

The walk up is totally worth the view.

Happiness is sighting a mountain peak from miles away and yet screaming in joy as if you summited one!

4. The serene Rinpung Dzong in Paro.

I can see it from my hotel room. Perched over a hill, overlooking the Paro Chu river, throwing inviting looks every time I gaze out. A total enchantress!

Like most Bhutanese Dzongs, even the Rinpung Dzong houses a monastic body and administrative offices including district courts.

Translated as the ‘Fortress on a heap of Jewels’, the Rinpung Dzong is a massive architectural wonder. The courtyard is deserted. The sky is outcast and it starts to drizzle as I try to capture the entire the courtyard in a single frame.

With beautiful colors of ochre and indigo splashed on the windows and ornate gold doors, the administrative quarters connects with the monastic via a wooden stairway. I walk past the ‘Kunre’ where monks have finished their lessons for the day.

Colourful Thankha paintings and murals adorn the buttressed walls of the Dzong. The monastic quarters houses several prayer halls and chapels. Photography is prohibited inside these shrines, like in all other Lhakhangs.

Dozens of butter lamps shine in the Lhakhang and the only sound I hear is the flap of the yellow curtains against the wind.

I can imagine how alive this courtyard must be during the Paro Tsechu ( a dance festival held annually, where masked dances are performed by the Lamas)

A wooden carved archway leads to a balcony overlooking the Paro valley. I see the sun rays hiding behind grey clouds in the outcast sky.

I chase them as I walk down to the cantilever bridge on the Paro Chu over a pebbled pathway. The deserted Rimpung Dzong in the background and the gushing waters of Paro chu underneath, weaving one of my most picturesque memories in Bhutan.

Happiness is having the whole Dzong to yourself as you are the last one to exit it.

The happiness chronicles are not yet over.

Stay tuned to know how I find happiness in unexpected ways and corners, scattered aplenty in this beautiful nation!

74 thoughts on “Bhutan Diaries : of Happiness and Dzongs”