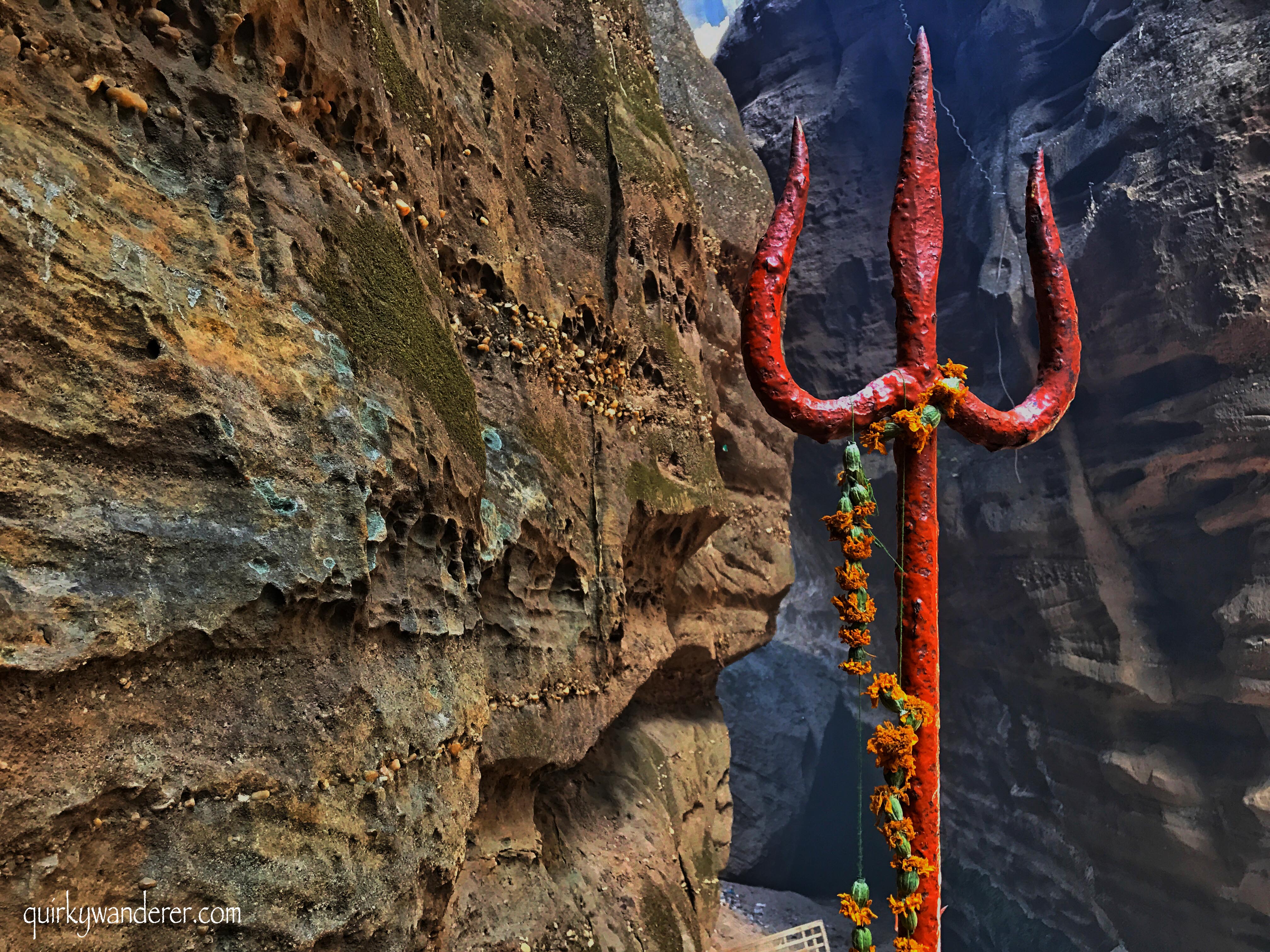 It was my second day in Pachmarhi.

At 9.30 in the morning, I was all set to visit the famous Jatta Shankar caves. As Saeeb, our guide led the way, I feared it might be one of those Shiva pilgrimages where oodles of milk overflows into drains and mosquitos hover over these drains. Seeing the line of shops selling offerings further confirmed my fears.

However, the curiosity of experiencing caves with the natural formation of Shiva’s matted locks got me going.

We walked through a rocky path with boulders on either side.

There were saffron-coloured Trishuls standing at every corner and air was filled with the ringing of bells in the many tiny temples on the way.

The rock-cut mountains and the sound of water were constant company till I saw an old lady with matted hair.

She sat on a rock, in rags, with unkempt hair and a wrinkled face selling oils to cure joint pain.

As I moved ahead, she began to sing. I stopped. Her voice had nothing to do with age or frame.

She sang and the robust voice reverberated across the ridge.

Words could give goosebumps and here was proof. Her “Om Namah Shivay” cut through the boulders and resonated straight back while a crowd assembled to listen to her.

She continued singing as I walked towards the cave, her chanting kept ringing in my ears.

I take the final staircase to go down to the caves and the scene is nothing short of dramatic.

Sun rays filtered through the trees falling perfectly on the perpendicular stack of Trishuls outside the cave. The fumes of smoke from the Havan swirled  higher and higher creating a surreal atmosphere. And when this smoke met the morning rays, magic was created. For a moment, everything around me dissolved. The people, the murmurs, even the ringing of bells seemed distant.

The Trishuls stood against the backdrop of an enormous mountain. As devotees bend down and entered a small horizontal opening, I ventured around to absorb the aura of the place.

It was mystic and the place reeked of positive, powerful vibes. On one had were two sides of the mountains trying to meet each other , on the other hand were huge boulders hanging precariously as if stuck between the mountains.

Inside the cave, the lights were dim and I could see many natural rock formations (shivlings). These are actually stalagmites, round in shape revered as natural lingams.

It is said that every Shivratri, a snake visits these and leaves the cave. The ceiling of the cave has a formation of snakes which resemble the matted locks of Lord Shiva, hence the name Jatta Shankar. There was water on the floor of the cave as well as water dripping from the ceiling. No-one knows the source of water, which is popularly known as Gupt Ganga.

Once out of the cave, you can see two small ponds (Not so clean), fed by springs.

The unique surroundings of Jatta Shankar, coupled with the aura of the place, draws so many pilgrims/tourists to this place.

I left with the echo of the lady’s voice and the chirping of birds ringing in my ears, still in awe of the enormity of the boulders.

Story of Jattashankar temple: It is believed that Bhasmasur, a devotee of Lord Siva wanted a special power to turn anyone to ashes with his touch on their head. When he was granted this by Shiva, Bhasmasur misused the power by trying to test it on Shiva himself. Shiva had to flee and take refuge in this cave.

Do not forget to munch on the local mulberries sold in tiny packets on the pathway to the temple.

My pursuit of Shiva continues. It was now time to head to Bada Mahadev, a shrine located at a distance of 10 kms from Pachmarhi. The journey to the cave was scenic but the place is infested with monkeys waiting for pilgrims to get their food packets out. This cave isn’t as dramatic as Jatta Shankar but is definitely bigger and longer. Water droplets ooze out of the rocks constantly and collect in a pool (kund). A cluster of Trishuls is present here as well. There aren’t any natural Shivlings here, but Saeeb brings attention to one very unique Shivling, which he claims, dates back to the 7th century.

There is also a Parvati cave nearby, dedicated to Shiva’s wife, Parvati.

It is believed that Lord vishnu killed Bhasmasur here by tricking him, looking like a beautiful woman, taking the avatar of Mohini.

At a walking distance from Bada Mahadev is the Gupt Mahadev temple. If it weren’t for the sign and the saffron flags, you’d probably miss the opening of the cave. The cave is so narrow, that I wondered how I’d ever enter it. The priest instructed that only two people can slide in and walk sideways to see the shrine inside.

When these two come out, another pair will be let in( there wasn’t any scope of traffic jams of course).This was fascinating. Your body is pressed between the two walls of the caves and you inch towards a small ray of light. The cave is so well camouflaged that the name Gupt (secret)  Mahadev is apt.

The path ahead of Gupt Mahadev leads to Chauragarh, one of the holiest shrines for Shiva devotees, a steep 4 km climb with 1300 steps.

You can see the shrine from Forsyth’s point and I make a mental note to return someday, to see devotees carrying Trishuls on their shoulders to offer at the temple.

Saeeb tells me there are lakhs of trishaws up there, of all metals, even Gold and silver. They are auctioned later. It is said that if his wish is fulfilled, the devotee offers a Trishul at the temple.

Other caves in Pachmarhi:

In my cave hopping, I came across another extremely intriguing cave: The Reechgadh caves are a geological wonder. The route to the caves is extremely picturesque and the caves themselves are beyond gorgeous. It is a 15 minute climb but absolutely worth it. Kusum trees add colour to the rocky terrain as I walked on twisted tree roots.

Reaching the entrance, my jaw dropped in awe. I hadn’t seen such a magnificent cave ever. Suddenly feeling like an explorer, I crawled inside the catacomb corridors only to find bats inside!

The place is called Reechgadh as it was once the favourite haunt of bears. I adored it too. The huge cave, the solitude, peeping out of dark tunnels, and of course climbing a tree as well.

Pandav caves:  another famous tourist spot in Pachmarhi are the Pandav caves( it is believed that the Pandavas stayed here for a while during their exile).

The caves overlook a beautiful and well-maintained garden and as they are perched on a small hill they offer panoramic views of Pachmarhi.

No one can enter them as all of them are sealed and yes, they do lack the magnificence of the other caves, but the climb is worth the view you get.

Pachmarhi is a beautiful, highly underrated place. From mysterious caves, to fragrant jungles, gorgeous waterfalls and ofcourse, to find Shiva!

94 thoughts on “Finding Shiva in the caves of Pachmarhi”