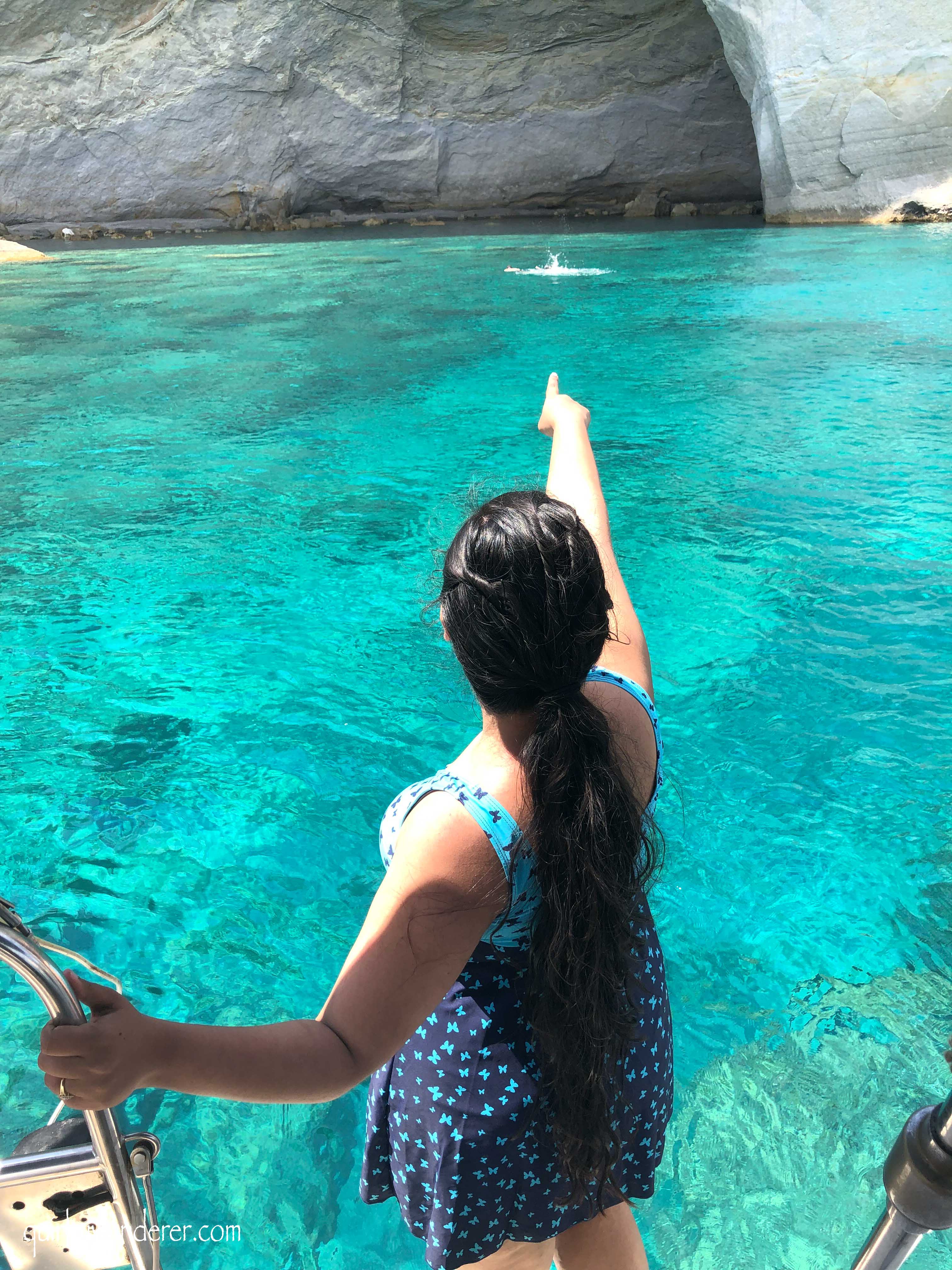 “Jump!” I plunged into the teal coloured, crystal clear waters of the Aegean Sea. Bubbles, gasps and struggles to keep afloat followed. But I was close to the Polco boat and closer to the some of the best boat mates, who happened to be swimming trainers from the US. I was in Milos, a Cycladic island in Greece and it felt like a dream. Still does.

I was trying very hard to squeeze Milos into my Greece itinerary. Turquoise waters gleamed on my Instagram, as I scrolled through pictures posted by travellers, tempting me. We had just two days, but my heart was hooked onto selecting Milos, among the four other Greek islands we had shortlisted. Why Milos, you might ask?

It felt different. Even in the pictures, there were volcanic rocks, a surreal white beach, crystal clear waters, splendid lagoons and it didn’t come across as very touristy. It really wasn’t a tough choice to make. So when Milos entered our itinerary, the search for photographs intensified and I encountered an incredible underwater picture taken through a GoPro. I could watch it for hours. This is when I virtually met Pol, whose company, Polco sailing conducts boat tours around Milos.

In the two days in Milos, I was determined to spend one day on a boat tour, discovering the coastline. Pol had said, “Milos is the best island in Greece”. I was now very intrigued.

We met Pol and his crew at Adamantas port (the main port of Milos) at 9.30 am for a day tour around Milos. The plan was to go upto Kleftiko via Sykia and explore the hidden caves and secret coves. The weather was perfect for sailing and the group size was limited to ten. Ideal, in my opinion, as we could interact better and the boat wasn’t crowded.

What followed was a day under the sun, with a lot of tan, smiles, jaw dropping exclamations and laughter. As our boat left the port, little did I know, this would be my most memorable day in Greece.

I felt the wind in my hair, as the boat bobbled joyfully over waves. Once the boat rules and do’s and dont’s were explained, Pol showed us the fishing village of Klima, with it’s boathouses that had doors of every hue: blue, green, red, yellow. The boats were stowed away in the ground floor and the houses were on the top. Klima passed, but Pol’s wonderful stories continued. We were off to see a rabbit and a bear.

Yes, a rabbit and a bear, right in the middle of the sea, flanked with water on every side. Fifteen minutes later, we saw them. Excited oohs and ahas followed.

It was all so therapeutic. The waves, the soft music playing in the boat, laughter floating across, the sun shining on all of us and the scenery!

We then crossed a mining site, where Pol explained the history of mining in Milos. Milos is primarily known for it volcanic formations and mines. The main minerals mined in Milos are Bentonite, Pozzolan, Perlite, Siliceous stones, Kaolin and Baryte. The sulphur mines of Paliorema are a tourist attraction and so is the mining museum.

The waters were now getting clearer and the stones underneath were more visible. It was perhaps the perfect spot to swim. Here, the boat was anchored and this was indeed our first spot to get into those tempting teal coloured waters. The nervous me, held on to the float (a terrible decision in hindsight) and looked around for encouragement to jump (which I got in heaps). What followed was a rather plucky, impulsive, awkward and uncomfortable jump. But, the bottomline: I was in water, not on the boat. I was part of what feels like a dream now and I did something I could never imagine doing!

Statutory warning: Once you get in the water, it is quite difficult to get out. The waters warm upto you and all you wish to do is be a mermaid for the rest of the day.

When you actually get back on board, Maria welcomes you with freshly made food (if you’re a vegetarian, fret not, that is taken into account as well). For those who can’t wait to share their epic dives and swims with families back home, there is wifi on board too! Fancy much? Definitely YES!

The boat is off again, this time to a place Pol says is better than the first spot. We cross mountains formed of volcanic rocks and the waters are getting even more inviting than before. From green to a sparkling blue as the sun shone brighter. A small inflated boat trails behind and soon we are going to get into that in batches of six.

As the boat whirred, we were off to one of the finest caves of Milos: the Sykia cave. A narrow opening led us into this wide, spectacular cave with rocky formations, boulders and crystal clear waters. Once we reached the rocky shore, we were left to explore, swim and snorkel in the waters. But me and a few others climbed up. It was certainly not an easy climb, but once we were up, the view was breathtaking. Glimmering waters, so clear that the rocks underneath were easily visible, a comfortable silence and an open circular cave: this is what Sykia was all about.

When it was time to go, the only solace was : “You just wait and watch, the best is yet to come”.

The best? Wasn’t this the best, already?

The highlight of the tour was coming up next and by now, I had swam enough to leave the float aside and merrily twirl in the sea, like I belonged there. The waters were now a stunning turquoise and we were headed to Kleftiko: the pirate bay. Pol’s pirate stories kept us glued as we saw several caves, that once used to be frequented by pirates.

Klefiko was our final stop and when they said it was the best, they were right.

Gorgeous was an understatement. Kleftiko was the stuff dreams are made of: Picture perfect scenery, endless dives in the Aegean waters and mysterious caves.

Pol took us in the raft again, to several of these caves, one where we could get down and walk in the water, one that resembled the batman’s cave and the best one: the blue cave where the waters seem illuminated with blue light. This was even better than the super crowded Blue Grotto in Capri, Italy and I could even take a dip here. This magical cave made everyone a smurf with a blue tinge and we spend a good amount of time in this one, making it my favourite spot in Milos!

I had dreamt of swimming in such waters. The last time I did it was in Andamans. Fearless, free, with salt in my hair and the sea breeze kissing my face. It used to be a recurrent dream and I never could guess the place. As we began our journey back to Adamantas, I realised it may have been Milos.

There was music, dance, laughter and camaraderie on the boat. We played different songs for all nationalities on board. I even got a chance to steer the boat!

I was tired, terribly fatigued with all the swimming, awfully sun tanned and my hair had salt like never before, but it was certainly my happiest day in Greece where I made memories that would last a lifetime. Maybe I would go back to Milos one day, till then, I will revisit it in my dreams.

Milos is part of the Cycladic group of Islands in Greece.

The best season to visit Milos is May-September. June to August are peak tourist months.

The best way to see Milos, especially Kleftiko and all the caves is via a boat trip. Highly highly recommend Polco, they are extremely professional and fun people to sail with.

Polco sailing conducts several boat tours around Milos. I did the half day Milos boat tour to Kleftiko.

The cost of the trip per person is 90 euros (with drinks, snacks, lunch). Wifi and snorkelling gear are available on board. 27 thoughts on “Exploring Milos Island in Greece with Polco Sailing”